How the static system works

The static system features a pipe fitted with nozzles above each bed. This pipe is usually an integral part of the construction of the bed above it. The upper bed is the exception; an extra pipe is installed above this bed. The nozzles spray water at a certain pressure to prevent dripping afterwards. The droplets are smaller than in conventional systems and disperse water as a fine mist in the air through the whole growing room.

Advantages of the static system

The input of labour is eliminated. The system is fixed in the growing room, so there is no risk of infections being spread from room to room.

Disadvantages of the static system

It is crucial to install the static system properly. I often see problems caused by incorrect installation, such as sagging pipes which twist the nozzles so the mist is sprayed against the bed above. This causes poor water distribution and in places where too much water collects black spots will appear on the mushrooms.

Good filters and clean water are essential. You won’t notice blocked nozzles during spraying, but only notice that a nozzle failed to work afterwards during the recovery period. Blocked nozzles will lead to a completely dried out casing soil with far too much mycelium growth. If a nozzle sprays too much water, the result will be rotten compost.

The static system creates a finer mist of droplets. When the system is active, the entire growing room is filled with mist. To ensure optimal water distribution, the fan must be switched off (automatically) during spraying until the droplets have settled.

Even if the system has been installed correctly, the droplet size can be another disadvantage. During mycelium growth into the casing soil it is more difficult to encourage coarse mycelium threads. The very fine droplets mean that water has more difficulty penetrating through the casing soil. Another problem is watering during the flush. The tiny droplets cling to the surface of the mushrooms for longer so they dry more slowly. This carries a greater risk of discolouration.

Despite these findings, many growers are going back to using the conventional systems … 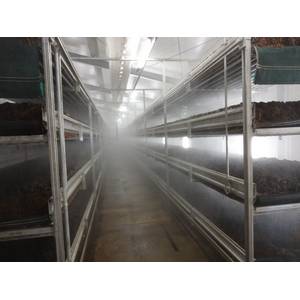