In the vegetable kingdom the mushroom is ranked with the heterotrophic organisms (lower plants). In contrast to the higher, green plants, these heterotrophs are not capable of photosynthesis. Fungi are the scavengers of nature. In mushroom cultivation too, waste products such as chicken manure, horse manure, straw, gypsum and waste water (from their own composting) are used to produce  a high-quality substrate from which the mushrooms will grow. Ammonia is removed by means of an ammonia washer from the process air before it is returned to nature. Even the ammonia from the air is used as a source of nitrogen in composting. The fungus, also called mycelium, uses the compost as a source of energy for its combustion, in which energy is released that is used for growth. 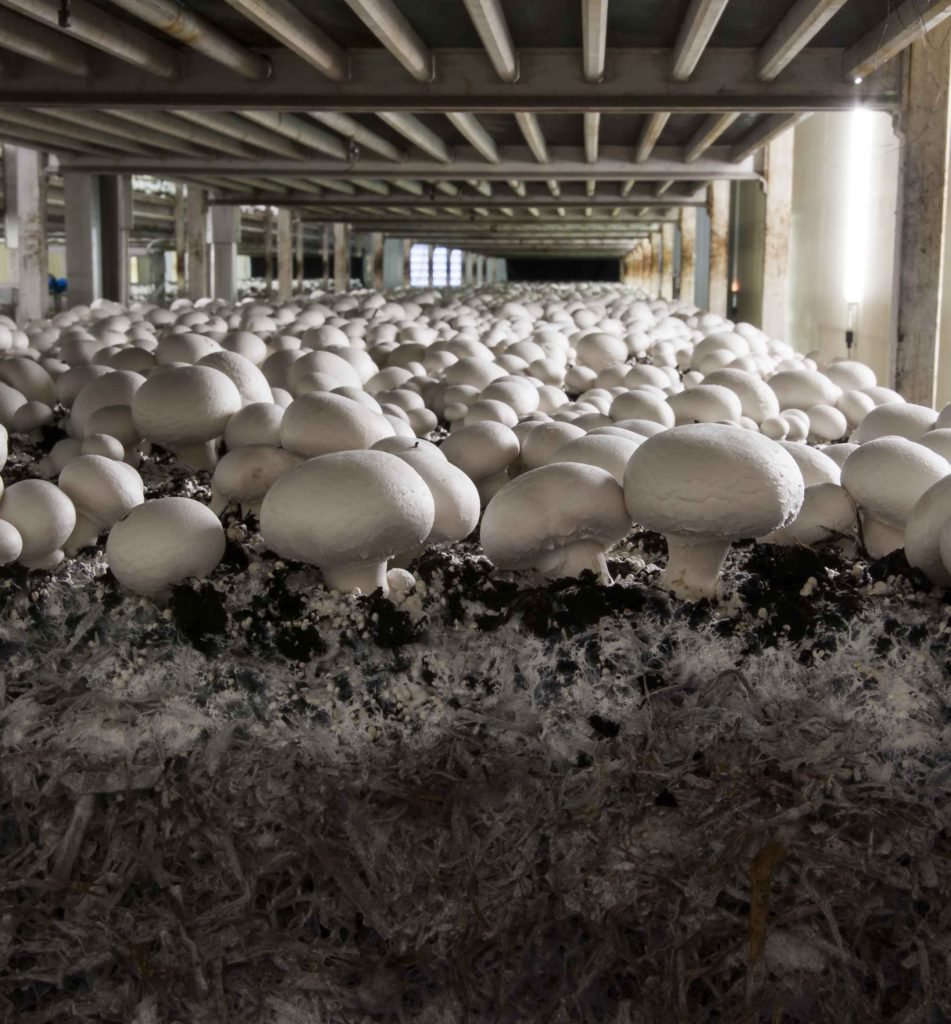 Mushrooms, good for your health!

Mushrooms are good for your health. They contain few calories, but are rich in fibres, vitamins and minerals. In the table below states the nutritional value per 100 grams of mushrooms in comparison with vegetables.

Mushrooms contain an extra amount of vitamins B2 and B3. These vitamins take care of the metabolism and the release of energy from carbohydrates, proteins and fats. Vitamin B2 is also necessary for a healthy skin. Folic acid is necessary for growth and the production of blood. It is one of the few vitamins of which, on average, we take in too little from our food. Potassium is necessary for a healthy blood pressure and for muscle and nerve activity. Phosphorous takes care of healthy bones and teeth and of energy metabolism. Copper is necessary for your immune system, nerves and for the synthesis of body cells. All these nutritional values occur in high concentrations in mushrooms.

Mushrooms grow on compost. The compost is produced at specialized companies. From the moment the raw materials are mixed, up to delivery of the compost to the mushroom farms. The process takes four to six weeks, depends depending on the raw materials and the system used at the Compost yard.

When the compost has been delivered at the mushroom farm, it still takes 16 to 20 days before a start can be made with mushroom harvesting. Harvesting takes place during two to three weeks. After this it is no longer cost-effective to harvest.

In the diagram below you can read the various phases. All these phases take place at the composting company.

Depending on the raw materials this phase takes a minimum of 5 up to even 18 days. The most important objectives in this phase are:

After this phase, the compost is called “phase I-compost”, “fresh compost”.

Mycelium growth in the compost

After phase II, the compost is taken from the tunnel and mixed with spawn. Spawn consists of specially prepared grains of corn which grows on with the mushroom mycelium. From the spawn the mycelium grows through the compost. This process takes a minimum of 14 to 18 days. At the end of this phase the compost is called “phase III-compost”  or full growth compost. This phase takes place both at the tunnel company in the same room where phase II takes place or at the production company. In the Netherlands and the more developed mushroom cultivating countries this phase takes place at the composting company.

In the diagram below you find the cultivation diagram at a mushroom farm.

During filling the compost is put in a layer of 20 cm with on top a layer of 5 cm of casing soil. This layer is pulled into the shelf system of the cultivation room. Casing soil consists of a peat mixture, mixed by a specialized company. At farms where they do phase III themselves, the compost remains in the room, but after 14-18 days, a layer of casing soil is put on the compost.

Mycelium growth in the casing soil and recovering period 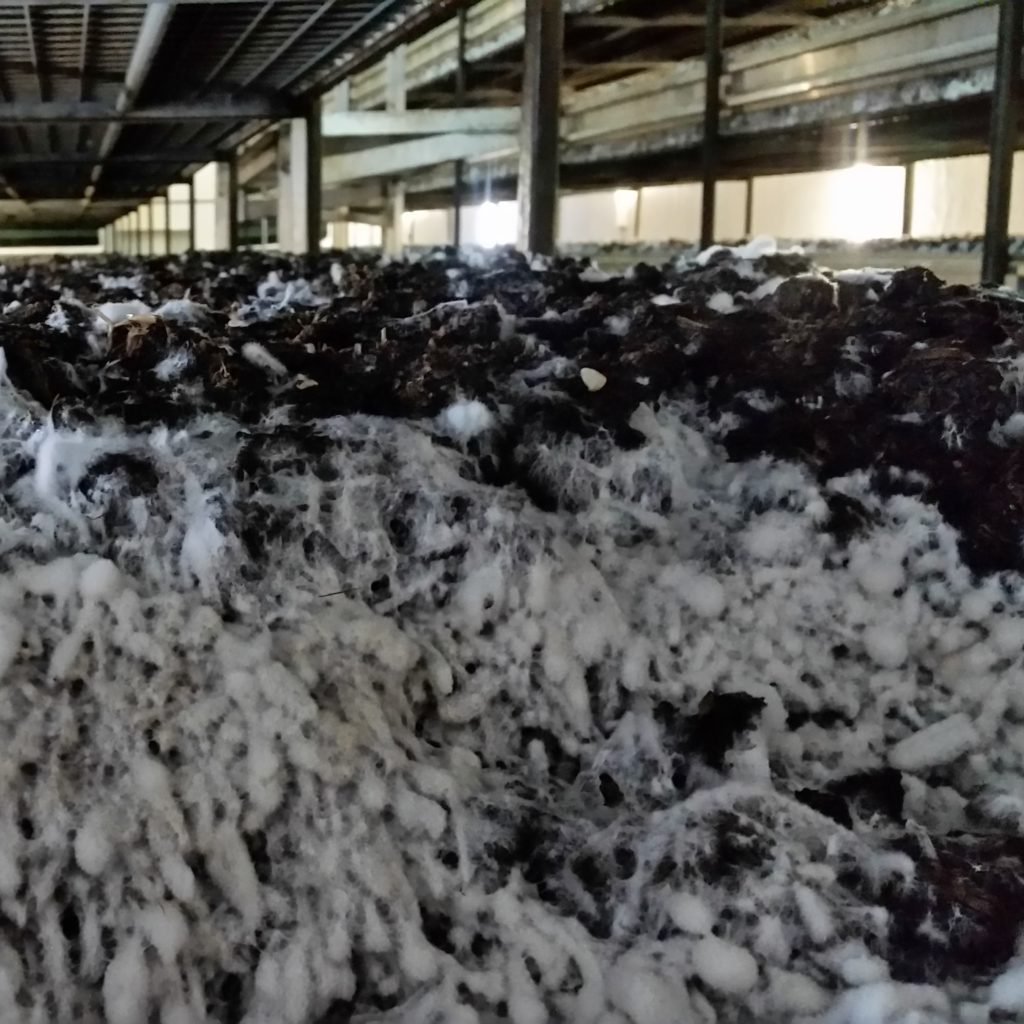 When the mycelium has grown to the surface, the grower starts cooling down. Cooling down is an imitation of harvest conditions. Because of colder air and lower CO2 the fluffy mycelium starts to contract. If the mycelium has contracted, 5-6 days after cooling down, it forms pins, which in the mushroom industry called pin or pinhead. These pins , (as big as pin-heads) are the mushroom primordia.  This period is called pin formation. After this Relative Humidity (RH) in the room is slowly lowered, so that the pins start growing into mushrooms. From pin to harvestable mushroom takes 5 to 7 days. The period after growing out of the pins is sometimes called “phase IV”.

Total production is between 27 and 35 kg/m2. Hand-picking mushrooms can be stored and consumed fresh. Mechanically harvested mushrooms are harvested in a once-over operation and directly processed and preserved. 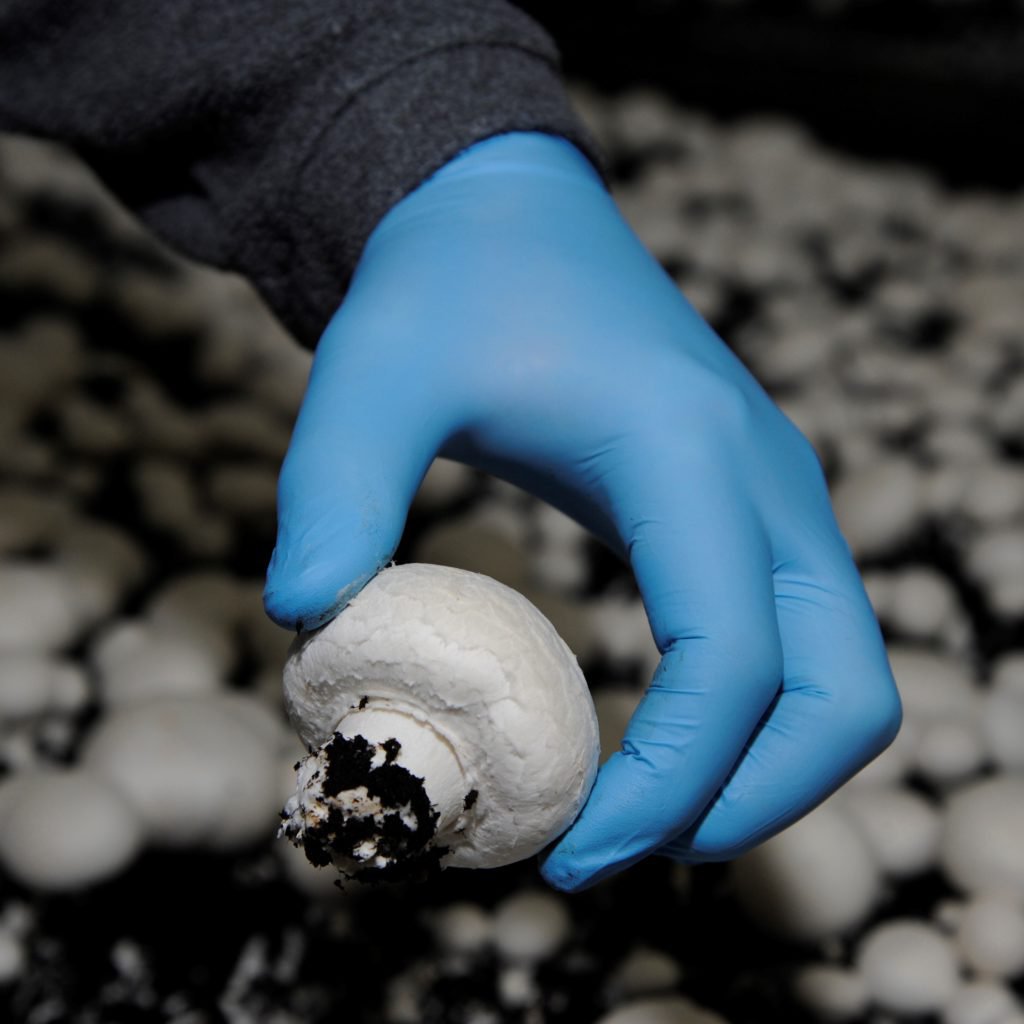